Evaluation is absolutely key to understanding what students and scientists have got out of the event, and figuring out what we can do better.

Evaluating I’m a Geoscientist. At the end of our first event, funded by the European Geosciences Union, we evaluated all of the event, answering some of our initial questions. Would geoscientists want to take part? Would we be able to run an international event? What questions would students ask?

After each event we compile a report for the zone, with web data, observations about popular topics, examples of good engagement and quotes from those taking part. We send the report out to all the scientists and teachers who took part, to give them a meaningful summary of their participation. 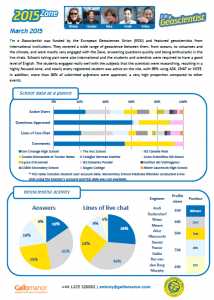 The 2015 Zone featured geoscientists from international institutions. They covered a wide range of geoscience between them, from oceans, to volcanoes and the climate, and were mostly very engaged with the Zone, answering questions quickly and being enthusiastic in the live chats.

Engagement was increased on the previous year across many measures. The students engaged really well with the subjects that the scientists were researching, resulting in a highly focused zone, and nearly every registered student was active on the site, with 99% using ASK, CHAT or VOTE.  In addition, more than 80% of submitted questions were approved, a very high proportion compared to other events. 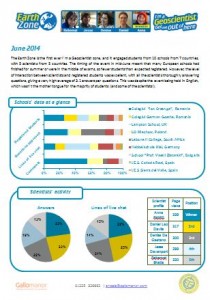 The Earth Zone was the first ever I’m a Geoscientist zone, and it engaged students from 10 schools from 7 countries, with 5 scientists from 5 countries.

The level of interaction between scientists and registered students was excellent, with all the scientists thoroughly answering questions, giving a very high average of 3.1 answers per questions. This was despite the event being held in English, which wasn’t the mother tongue for the majority of students (and some of the scientists!).

Here is the Earth Zone Report.