What Anna Rabitti did with her prize money…

Anna was the winner in the Earth Zone in the first I’m a Geoscientist event in June 2014, and won €500 to spend on public engagement. Here’s how Anna used her winnings, and what she has done since…

I took part to the first edition of I’m a Geoscientist in June 2014 and it was a very busy, intense, fun and rewarding experience. Sometimes I wonder who learned the most in those two weeks; the students enthusiastically taking part in the live chats and asking so many (so many!) questions, or myself, trying to answer what I could and honestly admitting my ignorance otherwise?

But eventually my efforts were rewarded with €500 (yippie!), and I promised to invest them in a project of local scientific outreach. In fact, the research institute where I am currently working, the NIOZ Royal Netherlands Institute for Sea Research, is located on a small island, Texel, between the Wadden Sea and the North Sea.

A ferry service connects Texel and the mainland every half hour. Since 1998 the ferry has been equipped with scientific instruments which take measurements of current velocity, temperature, salinity and other oceanographic parameters, such as suspended matter and chlorophyll content, every time the ship crosses the channel. This data is then used by colleagues here at the institute and elsewhere to monitor and understand the delicate ecosystem of the Dutch Wadden Sea. 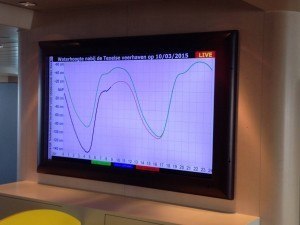 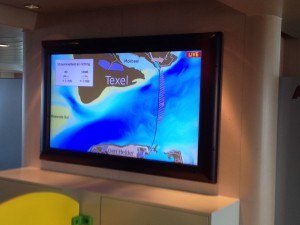 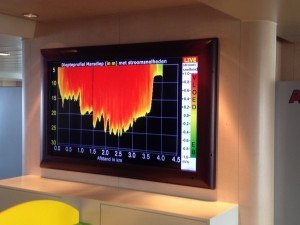 This data is also displayed in real time on two huge screens on the ferry to all passengers, as you can see in these pictures. In this way, besides collecting precious data each crossing, anyone taking the ferry is also informed on the existence of the institute on the island and updated with information regarding current speed and water temperature, information which is relevant not only for oceanographic studies of tidal inlets, but also for tourism or fishing.

In Spring 2016 a new ferry will start sailing along with the old one. It has been decided that this tradition of data collection and sharing will continue with the new ship, and new oceanographic instrumentation and display facilities have been already bought and designed to be put on board, for the joy of all scientists and ferry passengers!

No oceanographic instrument could be purchased with €500, however, together with the PR of the NIOZ, we decided to invest the money in a series of panels, to be mounted on the new ship, with information about the local marine coastal ecosystem, but also on the research institute in general and the global and local relevance of studying the sea around the world.

It is not the first time NIOZ has produced such panels, so here I show you some examples that are already on display in the institute’s corridors. The new ones will look similar, printed in large size, and will be on display on the main passengers’ deck, next to the screens with real time observations.

The panels have been designed, and the instruments and screens are ready to be mounted on board when the new ferry is complete. 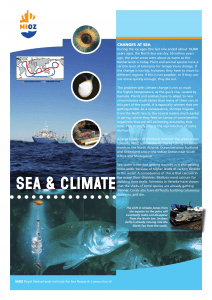 According to plans, she will be operating from Spring 2016, so just wait until then, and you can come and visit NIOZ and Texel crossing the channel on a brand new ferry!

Unfortunately, post-doc contracts are shorter than the time it takes to build a ship, so by then I will be somewhere else on this planet and I won’t be able to give you a guided tour — But hey, you could always read the posters and check the tidal cycle in real time!

It is very important to show to all passengers, citizens, locals and tourists, that someone is studying and taking care of the sea they are sailing.

Investing the prize money in such an outreach activity has left me with a small regret; it completely lacked any “human touch”. The social interaction is perhaps the aspect of scientific outreach that I like the most, since it allows me to go out of my office, and exchange ideas and perspectives with students and people doing other things, in other places, with other approaches and with different aims. But for the moment I live in a country where I do not speak the local language, so, what to do?

The money was already spent, but the prize you have honored me with was not consisting only of money, but also of lots of enthusiasm and a burst of fresh air and ideas.

So in September 2014 I enrolled myself for a one-week course on Science, Communication and Society, organized by the inter-university center Agorà Scienza. It took place in Italy, on the gorgeous hills of Piemonte. There, I met a bunch of enthusiastic researchers from all around Italy, and we have been offered the opportunity of broadcasting an eight episode radio program about science and researchers on the web-radio based at the University of Turin — Even from the Netherlands I could contribute to interviews and to the making of the episodes, and it has been so much fun!

If you are curious (and you can make sense of Italian) you can listen to all the episodes here.

The program was called L’Uovo di Colombo (The Egg of Columbus), and I’d recommend researching the story if you don’t know it!

We now have an open deal for a second season in the coming fall, let’s see where my next post-doc contract will bring me, but I hope I will have the time and enthusiasm to continue with this radio-project. I would have never have enrolled in the course without taking part in the I’m a Geoscientist competition, that is why I would like to thank you once again for all the doors this initiative has opened for me.